The trail broke through the forest canopy into the Fynbos offering a vantage point looking out over the forest extending below, the mist expanded to small clouds, then moments later swirled to nothingness, a rhythmic pulse repeating itself. Pausing to admire the vista, it appeared as if the forest was breathing, tantric in breaths followed by steady out breaths. It was a moment of seeing the forest alive as an entity, not merely as a support system of life within and around it.

Whichever section of the Afro-montane forest that I walk in in the Garden Route, there is always that tangible sense of life that withholds it secrets until you have relaxed and synchronized with the harmonics of the delicate balance within this ancient system of life.

In that quiet moment the forest reveals systems of sustainability, recycling, communication, nurturing, balance and revitalising. It can all be found amongst the towering trees, and ancient system that has endured transition for millennia.

From east to west there are also subtle nuances that differentiate the different sections of the forest, things like the average size of the trees and the variation of species composition which all are elements of the mosaic maintenance of health of the forest.

These are five of the top trails to hike in the Garden Route to get a comprehensive overview of distinct essence of the Afro-montane forest.

This trail system starts from the Saasvled Campus east of George and offer three loop routes of 7, 9 and 13km. The trail starts with a steady 1.3km descent to cross the upper reaches of the Kaaimans (Kaaimans is an old Afrikaans word for Crocodile and is similar in pronunciation to Caiman, the South American crocodiles) River followed by a slight ascent to a contour path. The route has distance markers for each route making it easy to judge where you are. The section heading up from the river crossing has had some trees fall over in the past year which has opened up the views of the canopy in the valley below which are great for birding and simply seeing the top of the canopy.

Most of the wildlife in the forest is nocturnal and you will see plenty spoor and dung of Bushpig, Bushbuck, Blue Duiker and Porcupine. Closer observation along the route will also reveal territorial Bushpig markings and rubbings on some trees. Not often seen, but definitely living in the area is evidence of Cape Leopard. We were fortunate enough in March 2018 to find fresh dung of a Leopard on the trail.

Other dung regularly seen on the trails are Baboon and horse dung (which should not be mistaken for elephant dung).

The Blue and Red routes both cross a service road that leads to the forest fringe flanked by Fynbos.

The Giant Kingfisher Trail is an iconic riverine forest trail that meanders along the course of the Touw River to a series of cascades and waterfall. The trail starts on the western bank of the Touw River on a ground track before crossing over to the eastern bank and becoming a boardwalk trail to the cascades.

There are two options to cross the river, the first is a self-propelled pontoon and the latter a series of stepping stones which can become covered when the river level rises.

It is a trail that offers two perspective of the forest, firstly from the ground level with the towering trees and massive mature Outeniqua Yellowwoods (Podocarpus falcatus)lining the river banks to the almost canopy trail as the boardwalk follows the contour across the steep slope presenting eyelevel views through the canopy and down onto it at times.

At the cascades there are a few options, either go down to the lower pool to swim, stay on the middle level and photograph the waterfall or scramble up to the top level to swim in the top pool.

‘What causes the brown to black colour of the water’ is a regular question asked by guests. The reason for the water colour is the leached tannins from the humus layer in the forest and the root mass in the Fynbos. Simply, the river is a large stream of tea.

An extremely popular trail close to Knysna, the Woodcutter trail has two loops, the 3km and 9km distance options. Starting from the Dalene Mathee memorial, both loops head off on a service gravel track for 500m before turning right onto a single track for a gentle downhill to cross to tree fern flanked drainage lines before a steady uphill to the 1.8km marker. Here, the two loops split with the 3km loop heading off to the right to the finish while the 9km loop continues up hill.

After the split, the 9km loop then tracks a contour trail before a gradual downhill section to Forest Creek to another contour track up the slope from the stream. There are two swimming spots, either in the Jubilee Creek stream or close to the 5.5km marker in a pool with a cascade flowing into it. The final section of the route has an inevitable uphill then a flat section to the finish.

Both routes have plenty birds, butterflies (in season), fungi and if you are lucky an occasional sighting of a chameleon. 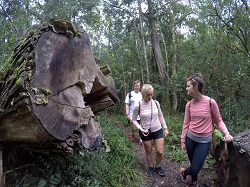 Named after the famed Knysna Elephant, there are three loops with distance options of 7km, 9km and 11km. For hikers wanting longer distances, two of the

trails can be combined for a 18km loop.

All three routes start at the Diepvalle Forest station which is also the location of one of the overnight stops of the Outeniqua trail.

All three trails are through moist high closed canopy Afro-montane forest without any views from the trail. While the chances of seeing an elephant are almost zero, careful observation will be rewarded with either a mound of elephant dung or a foot print next to a stream, evidence that it/they are indeed still around.

While there are some magnificent specimans of giant Outeniqua Yelllowwoods on all the routes, in contrast to the Groeneweide Trail, the majority of the trees are not large, testimony to the greater level of timber harvesting prior to the protection of the forests. 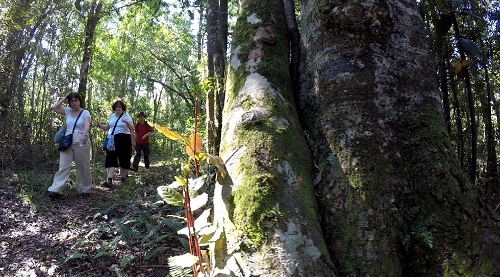 Set between Knysna and Plettenberg Bay, the Perdekop Trail is an easily accessible forest hike. The route is a 9km loop through superb mature Afro-montane forest. At the halfway point there is a rest spot at a small fern flanked waterfall.

The route doubles up in section with the mountain bike routes and is a mixture of service roads and single track through towering trees. A definite highlight is a section of trail beneath a towering canopy of Hard Pear trees. Equally exciting is the amount of Stinkwood saplings visible along the sides of the trail.

The start of the trail sets off on the same route as the 3 day Harkerville Trail and is well marked with the stylised image of a horse’s head. Important to note is that the nose of the head indicates the direction of the trail at intersections otherwise you can end up on the wrong route.

For guiding on these and other trails contact Mark via email.

2 thoughts on “Top 5 Forest Trails in the Garden Route”