In search of Eagles

Two weeks ago, after guiding guests on a contour path hike on the lower slopes of Jonkersberg, I glimpsed a pair of eagles slope soaring along the ridge just before sunset. Back lit against the skyline, I instinctively identified them as Martial Eagles, but located approximately 3.5km away without a pair of binoculars, it was difficult to make a positive ID. 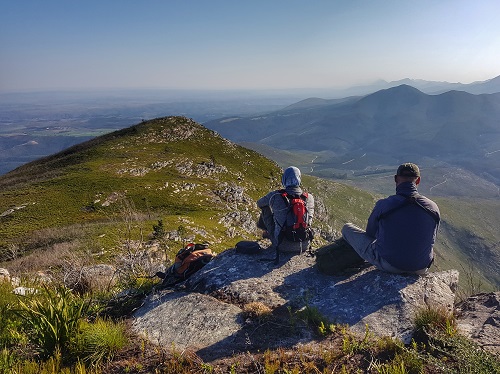 Jonkerberg is a mountain without a network of trails on it. As part of the Cape Fold Mountains, the mountain range stretches on an east west axis and is typically tilted with the geological strata sloping south and the northern slopes steep with sheer cliffs on the northern slope. Jonkersberg itself is flanked tot he east and west respectively by amphitheater like blind valleys. 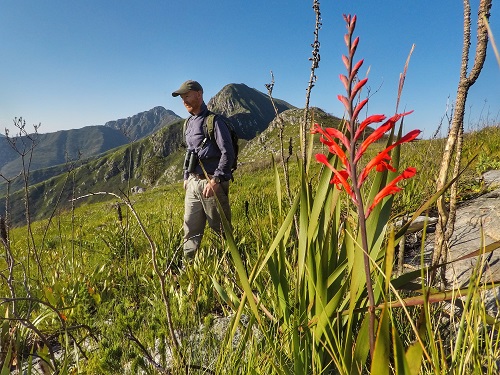 The mountain slopes are typically vegetated with Fynbos with a few kloofs and deep valleys containing isolated pockets of Afro-montane Forest. Martial Eagles often will nest in an old mature tree at the head of a valley

Birding in the Garden Route offers a notable species composition with some renowned endemics, but it is not a typical location for Martial Eagles, though there have been occasional sightings of a lone bird near Rondevlei and Langvlei during mild Bergwind conditions, and around Albertinia, also when mild northerly winds are blowing. This could indicate that either a lone bird is drifting in search of a territory or that, aided by prevailing northerly winds, a bird from the Little Karoo is taking an opportunistic foray into the Garden Route south of the Outeniqua Mountain range.

So to see a pair of Martial Eagles slope soaring just before sunset and then dropping down to the ridge was exciting. Add to this behavior the geological layout, the proximity to the little Karoo and the vegetation, there was the possibility that this could be a breeding pair of the Martial Eagles within the Garden Route. 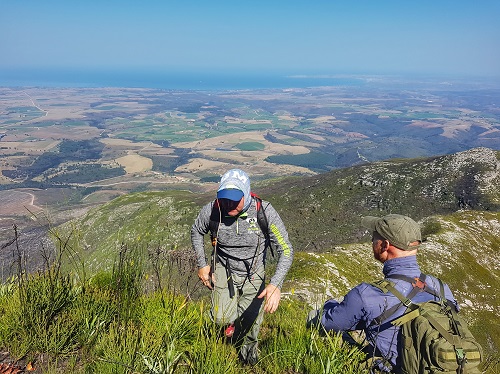 Eager to confirm their identity, I did some desktop preparation of a hiking route to get closer and possibly find a nest site. Jonkersberg has no trails to the peak and the choice was to either hike in from the SW or the SE. Either route would be wild hiking.

Coincidentally a friend, Jake Crowther, had done an exploratory hike to the peak at the same time as my initial eagle sighting and could suggest a route to the peak. He had hiked in from the SW and gave some valuable advice. 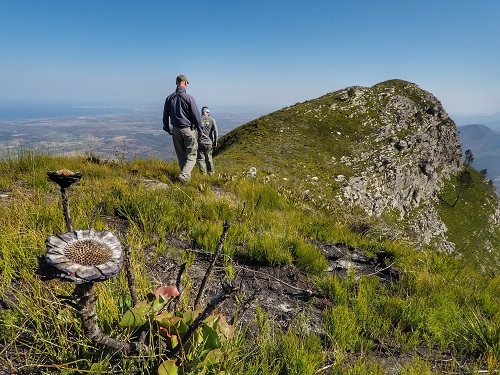 Most importantly, what made the hike possible was the wild fires of October 2018 which swept through the Garden Route, burning 108,000ha. The significance of this wild fire, compared to the 2017 Knysna wild fires, for planning the hike in to identify the eagles is that the Fynbos, a community of over 9000 plants which make up the Cape Floral Kingdom, had been burnt. 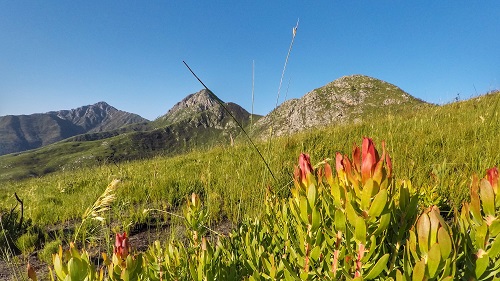 Fynbos is a fire climax floral kingdom which requires wild fires to burn it to clear accumulated biomass and to stimulate resprouting and germination of seeds. Prior to the 2018 wild fires, the Fynbos has an accumulated biomass from 30 years of growth without fires. Such a stand of Fynbos is near impossible to penetrate on a hike without heavy duty cutting equipment.

Now, ten months after the wild fires the mountains where a crisp vibrant green with rejuvenated Fynbos growth. More importantly, the Fynbos is short and easy to hike over, especially on a mountain without pathways.

Working our way up : 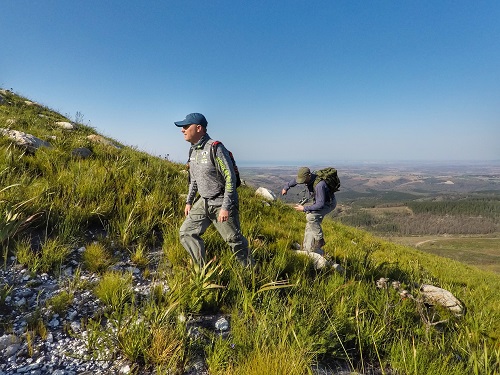 Opting for the SW route, we started from a forestry maintenance road and wound our way through a burnt down pine plantation that had yielded to the emergence of regenerating Fynbos.

Working up the southern slope we reached the ridge which would continue to the peak, punctuated by a series of outcrops and mini peak interlinked by exposed spines. 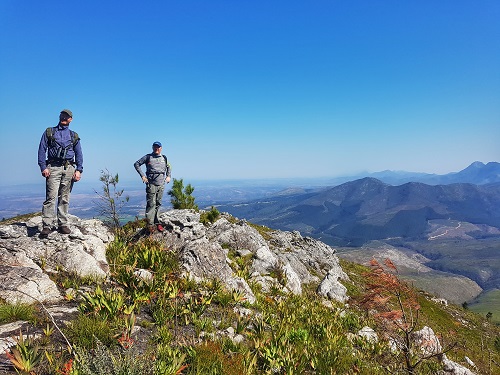 Together, James, Mike and I made our way at a relaxed pace. Jake had advised that we should wear long pants to protect our legs from the short burnt bushes that we would have to push through. Based on his hike we knew that we had roughly 8 hours of hiking for the anticipated return hike of 8km.

After 3.5km, on top of the first peak at 1020m we were taking in the spectacular panoramic view when a large raptor lifted out of the valley north of us. 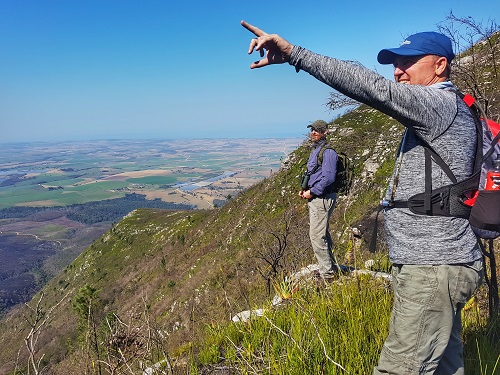 And there it was, a magnificent adult Martial Eagle. It lifted above the ridge to the west of us, glided towards and then over us, continuing tot our destination, the peak of Jonkersberg, a troop of Baboons alarming at it’s approach as they foraged on the southern slope.

It was exciting to have positively confirmed the identity of the eagle seen two weeks before, but we still had to confirm the presence of a pair which would strengthen the probability of a nesting site in the vicinity. 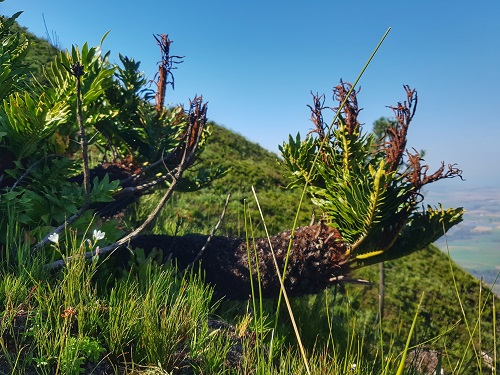 Continuing our ascent the range of our views stretched further along the Southern Cape coastline and into the Little Karoo. Oudtshoorn glinted in the red haze to the north, Stilbaai beyond Mossel Bay to the south west and Gericke’s Point decernable 55km to the east.

We also had a few more raptors fly by, riding the topographical uplift along the ridge line in pursuit of prey. A Jackal Buzzard, soared up only to stoop into a dive and disappear north across the valley. A pair of Peregrine Falcons, spiraled up on a thermal and disappeared in to the infinite blue overhead. Kiting above the baboons was a Rock Kestrel, alert to an insect or lizard disturbed by their foraging. 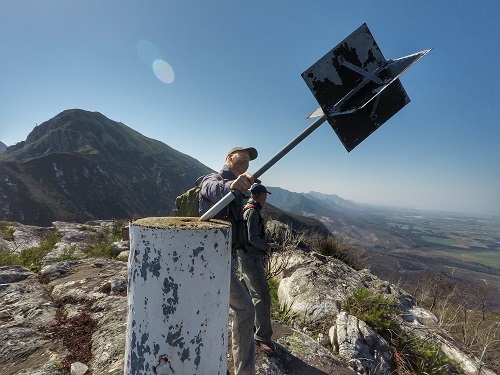 From the penultimate peak, we still had 600m horizontal distance to cover and 110m vertical ascent. Dropping slightly to a saddle and then a steep scramble, this was not the place for someone suffering from vertigo.

The Baboons alarmed again and scanning the sky above the peak James spotted a Martial Eagle. It dropped below the skyline just as a pair of harlequins of the sky, White-necked Ravens swooped past us from the west and darted to the peak.

Gripping the emergent vegetation for stability we edged our way up the slope, Mike working hard to control his vertigo to the level spine before the final slope to the peak. Overlooking a deep gully dropping north, the saddle was ideal for a lunch break. A lone pine tree offered the only shade as we relaxed and watched the cavorting corvids playing on the updrafts. 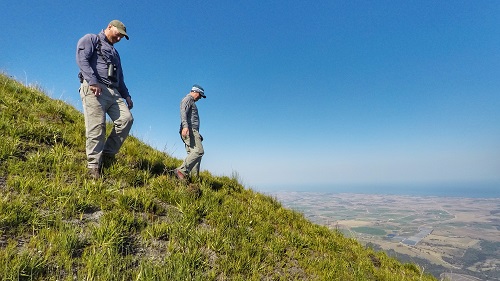 Having bagged the peak, we headed down, but still no pair of Martial Eagles. Nature had provided a window through the Fynbos to hike up this peak and confirm an ID. But it had done so much more. We had the opportunity to see the regrowth of the Fynbos, how Protea cynaroides and Mimetes paucifloris resprouts after a fire. We got to marvel at the carpets of Leucodendrom, Leucospernum and Brunia spp seedlings that had already transformed the blackend mountain to a mosaic of green. Every gully on the southern slope was choked with charcoal stumps boasting a crown of lush fronds. 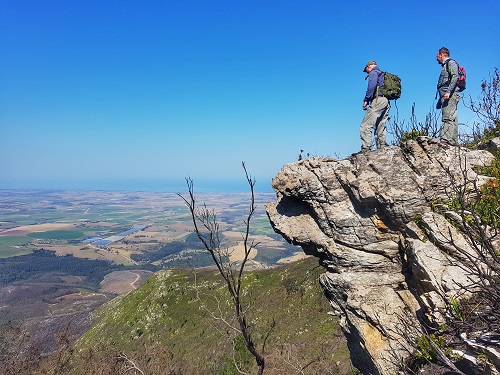 As we approached the spot were we had first seen the Martial Eagle spiral up from the valley, another eagle began a lazy spiral upwards. Smaller than the Martial, it too was dark above, a light chest and topped by a dark neck and head. It is disconcerting and thrilling to view and eagle from above, but it does challenge being able to identify it. Drawing level with us, the Booted Eagle performed a lazy loop and set off into the valley. 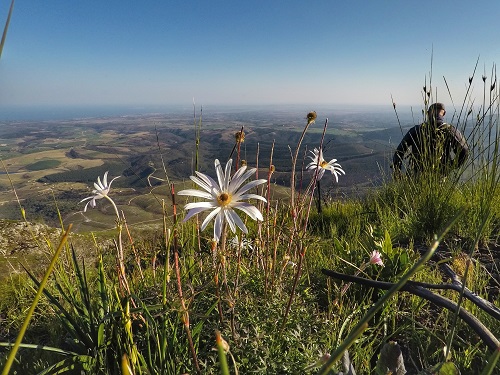 Behind us the Baboons alarmed again and glancing back, hanging above the peak was a pair of eagles. Majestic and large, there was no difficulty identifying them, a pair of Martial Eagles patrolling their realm of peaks teetering across the watershed between the Garden Route and Little Karoo.

We didn’t find a nest, but considering two sightings of a pair at the same location at similar times of day, there is a high probability that these apex predators have an eyrie between these peaks.

3 thoughts on “Garden Route hiking – wild route to the peak of Jonkersberg.”

Discover #hiking between the summits and shoreline in the #GardenRoute.
Every ascent has its benefits.
Rugged is the only way to describe the Harkerville coastline.
Neusgate is a distinctive geological landmark on the Robberg Coastal Corridor that indicates your approach to the overnight venue on the 2 day trail.
Golden cliffs.
Sauntering on the Suurbrak Trails - Day 5