Google Maps warned of a 9 minute delay on the N2 at the bottom of Sir Lowries Pass. After four hours on the road from the Garden Route, cresting the pass and seeing the gridlock traffic snaking down the pass was the last thing we wanted to see. But then, we did need to get to Cape Town and this was our only option.

Gridlock to the Mother City.

With Table Mountain in sight, we could almost touch our destination. Instead we had an half hour delay before traffic eased up and we cruised into the city for 3 days.

Bag it and Brag it.

Three days to tick off a few bucket list activities before Luca flew back to Oz.

Skirting the Crowds at Cape Point.

In the morning, first up was a visit to Cape Point, but not to do the herd activity of the selfie pilgrimage to the lighthouse. Instead, our primarly destination was to picnic and swim at Olifantsbos beach.

Every journey starts with a single step, and our start was a meander along the western board of Table Mountain.

Weaving past Clifton beaches and Camps Bay, the sea was a dazzeling topaz. Alluring, tempting and most definately deceiving, it hinted at a tepid tropical island swim which had Luca already reaching for his board shorts and Kikoi.

With the 12 Apostles towering to the left and the boulder strewn shoreline distracting attention to the road, we zipped into and through Hout Bay and onto Chapman’s Peak drive.

The view of Hout Bay from Chapman’s Peak drive.

A Coastal Panoramic Kaleidoscope of Vistas.

Visually Chapman’s Peak drive is a panorama of mountains, ocean and a rich geological cross section of sedimetary layers that are testimony to the staggeringly slow processes of plate tectonics which formed the Peninsula.

The final bend on the approach to Noordhoek opened up a vista of white beaches flanked by crystal blue waves.

The slow rush to popular sites.

The dreamy drive was rudely interupted by a 35 minute wait to get into the Cape Point nature reserve.

Inside, the obligatory Baboons hung around to greet the tourists, causing a further delay for the first of many photos. Despite their reputation as thieving delinquents in the parking area, they have become part of the Cape Point experience, a photo of them a digital passport stamp legitimizing your claim to have been there.

Liberty on the road less traveled.

The road to Olifantsbos beach was empty and ran straight through fynbos recovering from a past fire. Blesbok and Ostriches slowly made their way to a pan behind the dunes.

Pulling up at the beach a herd of Blesbok and a family of Ostriches were grazing the lush green grass flanking the silver white sand.

We ate our picnic on the rocky shore overlooking tidal pools before heading down to an aquamarine blue bay. The air was hot, the atmosphere of the dunes and bay, tropical sans any palms.

There is only one way to enter the Atlantic at this latitude and that is fast enough before you change your mind. At about 12°C, it felt like a Swedish sauna, plunging into the icy ocean from the searing sun. 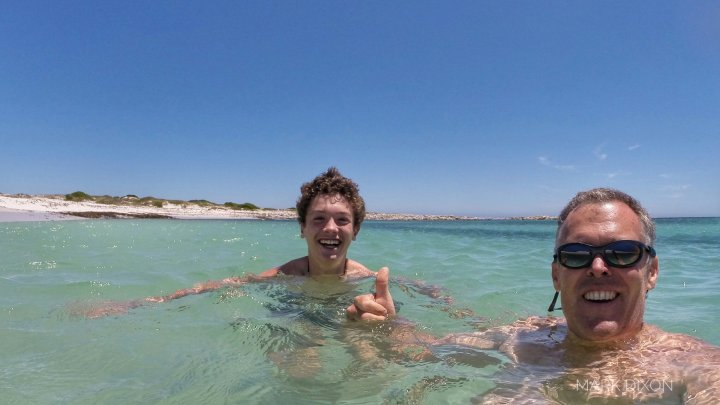 After 5 minutes we couldn’t feel the cold anymore.

After 90 seconds in the water you don’t feel your calf cramps anymore. After 5 minutes you don’t feel anything. And then you don’t care, because you are swimming in a bay all to yourself.

Back on land, warmed up from the heat of the dune, we set off to check out the lighthouse. 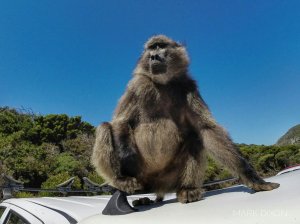 As we parked, a female baboon jumped over Lucas head and landed on our vehicles roof.

No sooner had got out of our vehicle, than a female Baboon jumped over Lucas head onto the roof as he closed the passenger door. Luckily she didn’t get into the car.

Heading up the pathway to the viewpoint, it was apparent that the baboon troop were on a roll with a pair of SANParks rangers attempting to chase them from the car park and restaurant area with catapults. Both rangers admitted that, for the day at least, the baboons had won today’s round, as I am sure they do every day.

With the afternoon sun catching the southern side of the lighthouse the cliff path route offered spectacular views of the peninsula heading out to sea past the lighthouse.

By mid afternoon the south easter wind had picked up, blowing the smoke from the Bettys Bay fire across the expanse of False Bay and unsettling the selfie brigade at the lighthouse.

Spoilt for a choice of Sunsets.

From the lighthouse we took the Simons Town route back to the city bowl to pick up Amanda from work foregoing Boulders Beach and the penguins.

With the endless options available, is hard to choose a sunset spot in Cape Town, but for our first one we opted for Oudekraal beach, a small boulder strewn bay with well maintained change rooms and parking. 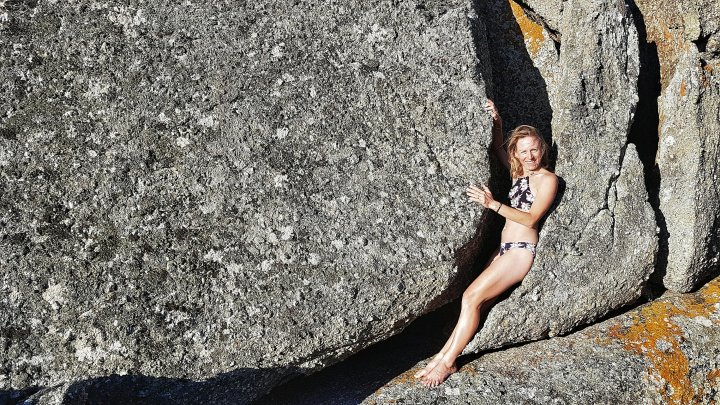 Ironically, the water was noticeably warmer than at Cape Point and we spent an half hour jumping in and out the water before scrambling over the boulders to catch the last rays of the setting sun. 24 hours done and dusted.

The plan for day two. Two Oceans Aquarium, gift shopping for Luca, meet Amanda for lunch and head to Blouberg Strand for an afternoon swim.

The BoKaap is the colourful historical Malay quarter

Colour up your day with some history and culture.

With a cloudless morning, we headed straight to the BoKaap, the historical Cape Malay quarter that is a vivid neighborhood infused with history and a cross spectrum of culture. Boasting no less than 11 Mosques, including the first Mosque to be built in South Africa, it has become a homogenous fusion of cultures that now live there. Another iconic venue is Atlas Trading, purveyors of eclectic spices, a legacy of the spice trading routes that rounded the cape. Needless to say all my cooking for the next six months is going to be spicier than before.

It is hard to choose a favorite exhibit at the Two Oceans Aquarium.

As a marine biologist, the Two Oceans Aquarium is always captivating. Each time is subtlety different, different exhibits catch my attention and so it was with this visit. While the penguin and predator exhibits sparked Lucas intrest, it was the Kelp Tank that really inspired him.

With an hour to kill before meeting Amanda, we scouted shops at the V & A Waterfront for gifts for Luca to take home.

A Seal of Entertainment at the Waterfront.

Nothing inspired him and instead we spent an entertaining 40 minutes waching Smiley, a mature male Cape Fur Seal who suns himself on a jetty waiting for a fishing charter boat to berth.

Basking in the sun, he rolled over a few times, then waddled to the edge of the jetty and without a splash, slipped into the water leaving a trail of bubbles from the air trapped in his fur. He was submurged for 2 minutes, then surfaced as the fishing charter arrived, hopped onto the jetty and greeted the guests and skipper as they disembarked.

Clearly he had done this forever, because then the show really started. The skipper dipped into a ice nox, took a few pilchards and broke them into sections, held them out. Smiley waddled forward, stretched, and as gentle as a lovers kiss, plucked them out of the skippers fingers. Used to the procedure, Smiley watched the skippers every move as he walked around the jetty getting more morsels from the fish being filleted by the deckhands.

Even as we had lunch at Quay 4, we could watch Smiley on his jetty, wating for the next morsel.

Looking Back at Table Mountain.

Cruising down Marine Drive to Blouberg Strand, the western sky was dotted with bright coloured kites. Parking close to the densest clusther of kites, we grabbed our swim gear and set off over the dune. In a mere 3 minutes the scene had changed, all but 2 of the kites were lined up on the beach with frustrated kite boarders milling around. ‘The wind is south west and not strong enough. Usually it is south east’ a frustrated German kiter informed us.

Still, two kite boarders were out on hydrofoil boards working hard to get a ride, but soon they too gave up.

Luckily we didn’t need wind to swim, and while the surf was choppy and not ideal for body surfing, we porpoised in the waves for half an hour before heading back to our accommodation where Luca prepared his signature dish, spaghetti bolgnaise, for us.

Day three dawned, our day for Table Mountain, to low cloud and zero view of the top of the mountain. We spent an hour considering alternative activities, calculating if we would be able to get the hike in before check in the next day.

Then, as if a magician had pull a cloth off a table, the mountain appeared, and the game was on.

Off the beaten track.

Our route was up Kasteelport to the Spine Trail with a quick detour to Surfers Rock before heading for Echo Valley and onto the cableway.

Every route up the mountain has its unique features. Starting up the Pipe Track the slope was covered with Leucospernums sp in full bloom, intricate flowers in a bright butter yellow with Cape Sugarbirds and Orage-breasted Sunbirds flitting through them.

Leaving the pipe track the trail got steeper heading up to the base of a cliff, layers of sedimetary rock exposed in section with dropaway views over the coastline and Lions Head pointing skywards towards the horizon.

From the cliff base the trail heads into a ravine with an impressive cliff buttress towering overhead on the right hand side.

300m from the summit the first of the Watsonia flowers appeared and as we got higher they got denser, a swathe of peachy apricot blanketing the landscape.

Turning right we made our way to the towering buttress, and from an old cableway foundation set off to Surfers Rock, not for vertigo sufferers, especially in windy conditions.

Lunch was a picnic on a rocky outcrop, a sublime open landscaoe devoid of anyone else. 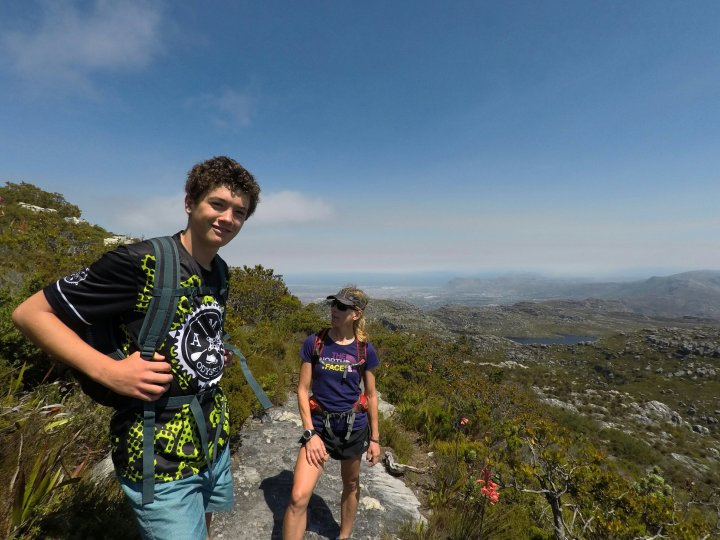 Into the maddening crowd.

By contrast, as we approached Platteklip Gorge, we encountered crowds and by the time we reached the cableway, we had to que for 45 minutes for our ride down.

South African Legacy of a Braai.

Lucas’s last South African dinner was a family braai where he spent an hour swimming with his cousin’s before heading home and collapsing into bed.

Always trying to squeeze the last drop of juice out of the lemon of deparure, Amanda had suggested a quick mountain bike ride through the green belt to Constantia neck and back.

Kitted up with borrowed gear, they headed off for a punchy ride on quiet streets and parkland single track.

All fun shifts its destination and we had to shift ours, Luca to the airport to head home, myself to the Garden Route to get on with 2019 and Amanda to her base to continue her current project till March.

None of us will forget the adventure of the past three days, an inspiration for many more outdoor pursuits and travel.