In June 2017 South Africa, and the world, watched in horror as a wildfire swept through the Garden Route destroying over 500 homesteads, farmland and timber plantations.

The shear destruction left in the path of the blaze amounted to 22,000 hectares burnt, 7 lives lost and communities traumatized.

The fire, like so many international wildfires that occurred in 2017, was the perfect inferno, the result of specific conditions. The consequence of global warming, five factors combined to fuel the Garden Route June 2017 fires, making them near impossible to control. (See Knysna fires: five factors that caused the perfect inferno.)

Almost 18 months later, in October 2018, again the Garden Route is burning. This time the fire path is different, raging along the spine and slopes of the Outeniqua Mountain range and continuing along the Titsikamma mountain range.

A fire warning of hot dry and mild Bergwind conditions was issued for the week of 22nd October.

A Bergwind is a common weather condition in the Southern Cape which produces warm to hot air temperatures (30°C to 38°C) with extremely low Relative Humidity (6% to 15%).

A consequence of a Bergwind is that vegetation and organic material dries out quickly, increasing its combustibility and making it ideal fuel for a wildfire.

Under these conditions any spark or flame can set off a wildfire. And it did.

The fire started near Herold, a small farming community at the top of the Montegu Pass north of George. Initially it burnt south to south east for the first day.

Then the wind swirled and calmed down and the fire set course along the Outeniqua Mountains. The range is aligned along a east west axis and the fire set off in both directions, though predominantly to the east to start.

Unlike the 2017 fire where high wind speeds hampered fire fighting efforts, in this fire the steep terrain and limited road access compromised fire fighting efforts. Ironically, on calm days the plumes of smoke remained above the fire making it impossible to use aerial support as visual reference of the fire was impeded by the dense smoke plumes.

A stand of Protea Neri nerifolia on the southern slopes of the Outeniqua Mountain before the October 2018 wildfire.

The Fynbos Floral Kingdom is one of six global floral kingdoms. Though the smallest of the six kingdoms, it ranks as one of the most species diverse with an impressive tally of over 9000 species.

More importantly it is a fire climax floral kingdom, requiring fire to sanitize and rejuvenate it.

It has evolved to have some incredible germination triggers for the species found within it. Climax species like the Proteas and Leucodendrons retain cones on the plant for up to 10 years. Only when a fire destroys the plant does the cone open and release the seeds so that they are available for germination.

Other species require the intervention of ants to either store or distribute the seeds. Some species seeds disperse with wind while others get covered in the soil beneath the mother plant.

All of them require a combination of environmental factors to germinate. Heat, moisture, humidity, smoke and barometric pressure are the main triggers, that when combined stimulate germination.

Fire is the source of heat. While not essential, it does enhance the rate of germination of the seeds. For Proteas and Leucodendrons the fire kills the mother plant and dries out the seed cone. This releases the seeds.

Ecologically, if a floral kingdom requires smoke for successful germination, then being flammable is vital to the future survival of the species of that kingdom.

In addition to germination stimulation that fire provides for Fynbos, additional ecological services include disease management. In short, it has evolved to burn, and when set alight, it does so vigorously.

In early October I guided numerous hikes on the Tierkop Trail in the Outeniqua mountains north of George in the Garden Route.

The main highlights of this trail are the panoramic views of the mountains and the attitudinal diversity of Fynbos.

Almost prophetic, I explained to my guests the role of fire in Fynbos and demonstrated on the vegetation why a fire in the near future was necessary for the continued health along sections of the Fynbos in the mountains.

Fungus and bacterial infections had proliferated in the stands of Protea and Leucodendron spp. Coral fern had smothered large sections of the southern slopes. It needed to burn. 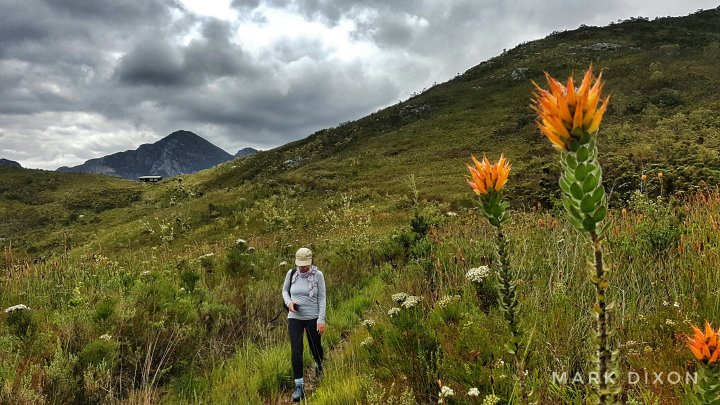 Having not burnt for close to 3 decades in some areas, the Fynbos was in dire need of a fire to sanitize and invigorate large tracts along the Outeniqua Mountains.

Within 10 days of my last guided hike on this trail a fire started in Herold and at the time of writing has been burning for 10 days.

With the prediction of rain in the first week of November, an early germination in December and January will transform the blackened landscape to a gloss of green which will flourish in the coming decades.

The October 2018 fire was destined to happen, and with the build up of combustible fuel for close to 3 decades, became a beast difficult to control.

Defendable Zones for the Future :

Timber plantations of exotic pine and eucalyptus need to be secured between corridors of Afro-Montane forest to mitigate wildfires burning across blocks.

Planning against wildfires in the future needs to be a fine balance between defending farms, plantations and homesteads and urban centers and maintaining the vigor of the Fynbos.

It is imperative that a 30 year spatial plan is compiled to defend against fires.

Both the 2017 and 2018 fires demonstrated that the Afro-montane forest, except under extreme fire conditions, acts as a natural fire break. Corridors of Afro-Montane forest need to be maintained, and in areas between plantations, need to be propagated to mitigate fires spreading between blocks of pine plantations.

Buffer zones between Fynbos and urban centers need to have regular managed burns with a high frequency program. These buffer zones should be at least 500m wide.

Rural and agricultural properties need to maintain defendable zones of a minimum of 250m to protect structures, assets, infrastructure and valuable crops and livestock.

If integrated in a coordinated manner future wildfires can be limited to the Fynbos without risking the wellbeing of agricultural, plantations and urban centers, all the while maintaining the combined health of the Fynbos and the safety of Garden Route residents.

6 thoughts on “Flaming Fynbos In the Garden Route”

5 days.
Let the adventure begin.
Discover the natural beauty of the #EasternCape
Heading off to the next marine adventure.
Did you reach your peak this weekend?
Discover pristine beaches and remarkable coastal habitats on the 5 day Garden Route Coastal Meander, a guided #slackpacking hike between #Wilderness and Brenton on Sea.