When we first drove into Elliot, it was at the end of the second stage of a long dashed trip from the Garden Route for an initial bird survey on a proposed wind farm. As we past the ‘Welcome to Elliot’ sign, the shadow of a Cape Vulture darkend our dashboard. I screeched to a halt, jumped out the car and focused my binoculars on the low flying bird before if dropped below a ridge on it’s lazy path eastwards. This was to be the first of many sightings of these silent airborne scavengers which provide an indispensable service of removing carrion throughout the surrounding mountainous region of the Eastern Cape.

Driving through Elliot was similar to many rural towns which epitomise the maladministration of service delivery and maintenance dispensed by incompetent municipal management traits. So it was with pleasant surprise that we drove into the immaculately manicured garden of our accommodation venue for the next two week, The Guardians B&B. 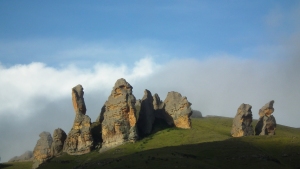 Named for the spectacular sandstone structures that tower over the property, it was an oasis within a dramatic geological landscape at the foothills of the Southern Drakensburg Mountains. The Guardians, as the sandstone towers are known, jut out from the escarpment like sentinels dispensing custodianship over terrain that beckons to hikers, mountain bikers, horse riders and rock climbers.

During our site setup and planning for the two weeks of bird surveys, we met a local custodian of the vultures, Mr Murray Andrews, the owner of the local abbatior. Combining forward thinking and nature conservation, Mr Andrews has established a vulture restaurant which employs the natural scavenging skills of vultures to dispense of the disposable by-product of the abbitoir. Natural and cost effective, it is a mutual symbiotic arrangement that has the vultures dispense a valuable natural service to the abbitoir. Mr Andrews has become the local guardian of no less than 150 Cape Vultures from two breeding colonies and two roosting colonies of a species that is both vulnerable and threatened in the region.

Indeed the vulture restaurant is renowned amongst researchers and we were fortunate enough to meet Mr Jan Venter of Eastern Cape Wildlife as he assisted Ms Morgan Pfeiffer to set up traps to capture adult birds to fit them with GPS tracking tags as part of her PhD thesis in an endevour to establish the genetic stability of the Eastern Cape population of Cape Vultures. Sadly, on the two days that they were present for trapping, success eluded them and they will have to return in the future for another attempt.

As part of our bird surveys in an effort to study bird populations and behaviour prior to the development of wind farms, we had to hike into one of the breeding colonies to audit the number of breeding pairs. Located in a buttress of towering sandstone in a naturally eroded ‘U’ shape with an impressive arch in the centre, forming a shape reminiscent of a horse spoor seen from above, the vultures were the ever circling guardians of the colony.

The hike in was not easy and started from the plateau above the escarpment. Unfortunately our guide, a local farmers wife had fallen ill two days before our hike. She gave a brief description of the hike, emphasising that we descend east of the buttress. We descended down a very steep grass covered slope into a wooded ravine which echoed with the enigmatic calls of Barrats Warbler. It was when we emerged onto a spine of bare sandstone that we realised that we must have descended down the wrong route.

Still, we knew we were close, above us an envoy of vultures circled accompanied by a pair of Bearded Vulture’s and a lone Verreaux’s Eagle. Approaching the gateway to the buttress along the mere line of a goat path clinging to the slope, we paused on a rock which millennia before had fallen from the towering cliffs and savoured the moment with a cuppa coffee.

Entering the hallowed inner sanctuary of the buttress was captivating. We were encircled by cliffs dotted with nests secured on ledges, while above adult birds tested the wind currents and thermals like commuters studying the schedule of an underground train service, each planning their departure to the restaurant on the plateau below.

During our two weeks we had ample opportunity to study the vultures and how they navigated using updrafts sculpted by slopes and ridges of the undulating terrain. Captivated by the threat to their aerial habitat and flyways that wind farms pose, I am in the process of considering a Ph.D to learn how relocation of vulture restaurants can assist in mitigating wind turbine impacts.

Ready for an adventure this summer?
Watching clouds chase across the arid Karoo.
There is a prevailing sense of summer in the Garden Route.
Which is your favorite beach in the #GardenRoute?
Sea kayaking.
Robberg Point