With the lightness of a drifting Dandelion seed, the juvenile Verreaux’s Eagle soared below us, for a brief moment admitting us into it’s new aerial domain.

We had been sitting on the top of a Karoo Koppie, a domed hill tetering over a vast pancake flat plain that stretched to the south. It is our final ten days of monitoring on a potential wind farm site in the central Karoo, east of Addo Elephant National Park.

Of the nine sites that we do bird monitoring on, this has to be our favorite. The sheer expanse, the hidden valley’s inviting exploration, the numerous gravel tracks to mountain bike along and with out a doubt, the magnificent raptors that we have seen have made this site an absolute pkeasure to ‘work’ on.

So, it has been with a degree of sadness that we prepared for our last visit to the site, but still, we had the chance to bid farewell to the sub adult Martial Eagle that flies past daily and the chance to again see the pair of Verreaux’s Eagle whose nest we could not find.

Now, it’s 10h15, a still morning with the background chatter of Cape Glossy Starlings and a lone Long Billed Pipit calling forlornly from the top of a tree. Amanda is busy scanning the plain below for a glimpse of the Secretaybird, or more hopefuly, a sighting of it roosting on it’s nest which we tracked down three months ago. 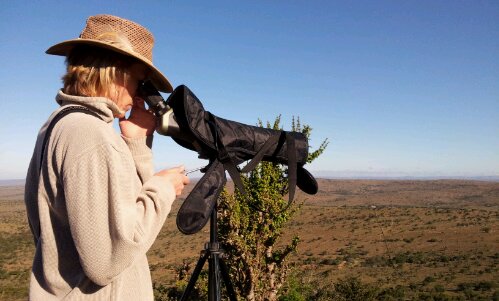 ‘Mark time’ she calls, an indication she has spotted a priority species flying within our observation range. In answer to my asking what she has, ‘a pair of Black Eagles. No, a pair of Martial’s’.

Within a heart beat, ‘Talon lock’, she calls excitedly, unable to lower her binoculars to show me where they are. Flying below the horizon against the uniform thicket landscape makes it difficult to make my own sighting. Aiming my binoculars in the direction she is looking I am fortunate as a pair of grappling birds erupts into my view.
It was as if I was admiring a mirror image of an African Fish Eagle stooping over a calm lake moments before it snatches a fish. Flying below and inverted was a Martial Eagle, an unmistakable brown crop and head, feet reaching up to a pair of out stretched talons of a marginally smaller raptor above it. Moments later they split, the dorsal brown of the Martial Eagle blending into the landscape, lost to sight.

Leaving Amanda to track the second raptor, I dashed to records the details of the flight only to be interrupted by an exclamation of dismay as Amanda lost sight of the second bird as it flew directly towards us and dissapeared below our elevated horizon.

What was the second bird? The colours were mottled and not distinghishable from over 2000m. 90 seconds later we had our answer!

Not more than sixty meters infront of us a magnifiscent juvenile Verreaux’s Eagle landed on top of a tree and started preening, rearranging ruffled feathers after trespassing the Martial Eagles territory. For three minutes, the silence of the hill top was punctuated only by the random musical notes of a Black Headed Oriole tucked away in a bush.

Our joy at this sighting was immense. This was the closest we had been to a Verreaux’s Eagle. We had been visiting the site for a year and regularly seen a pair flying along the ridges north of us. We have hiked and cycled over as much of the 10,000 ha site as we could in hope of finding their nest and possibly a glimpse of a nestling.

And now we had a juvenile a stones throw away. Could this juvenile have been reared on the site? Or had it flown in from further afield? I grabbed the camera and captured the moment, then still oblivious to our presence, the eagle spread it’s wings and dropped over the ledge, soaring on the updraft and floated over us before gaining height and heading north to another valley system.

This was sheer indulgence for two birders from the Garden Route. Now all we have to do is find the nest. A mountain bike outing we are looking forward to.

One thought on “Ruffled feathers of a juvenile eagle”